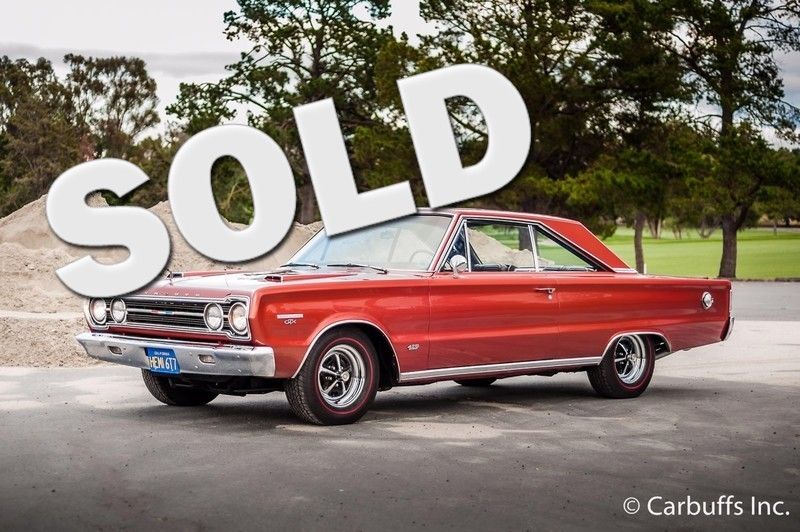 Factory 426 Hemi with only 32k original miles. We believe this car has had 4 owners since new. Purchased from the original owner in the late 1980’s by Reggie Jackson when it had around 18,000 miles. Reggie had the car resprayed by George Thomas (Mariposa Body) in the original color of Turbine bronze over a very clean body in the early 1990’s. The car was then sold to Gil Garcia who kept the car until being acquired by the current owner about 12 years ago.

The paint has held up very well with only a few little nicks from use and the chrome and trim still look great. All glass is nice. Interior is original with the exception of the carpet. Original seat foam was replaced with a foam kit from Legendary Auto Interiors and then the original factory vinyl seat covers were reinstalled. Auxiliary gauges were installed to keep tabs on the Hemi. Dealer installed AM/FM radio works. Factory tachometer and dash gauges still work. Interior is in very nice presentable condition.

Instead of freshening up the original engine, the current owner decided to go with a 472 ci short block built by Dave Timmons from Mopar Engines West in Fremont, Ca. The upper end (heads, intake, etc.) are the original components. The carburetors are correct numbered 1967 units. MSD distributor with hidden box. TTI headers and custom TCI dual exhaust. The engine runs and sounds incredible and runs very well on pump gas. The engine currently has under 2,000 miles on it. The non-original 727 Torqueflite was replaced with a TCI Super Streetfighter Torqueflite good to 750hp. The transmission has approx. 100 miles on it. The original radiator was recently redone. Included with the purchase is the original engine shortblock, distributor, exhaust manifolds and non-original transmission.

The suspension is stock and has recently had the upper and lower control arms bushings replaced and the ride enhanced with Edelbrock IAS shocks. The rear is the original 8.75″ Sure grip unit with 3.23:1 gears. Original front calipers have recently been rebuilt. Running 14×6 Magnum 500 road wheels as originally equipped with Redline radial tires.

This GTX has been built to be a great driver. Original parts have been set aside to preserve them. Drives incredible. Runs and sounds awesome. Torque on demand. Excellent investment that can actually be driven.