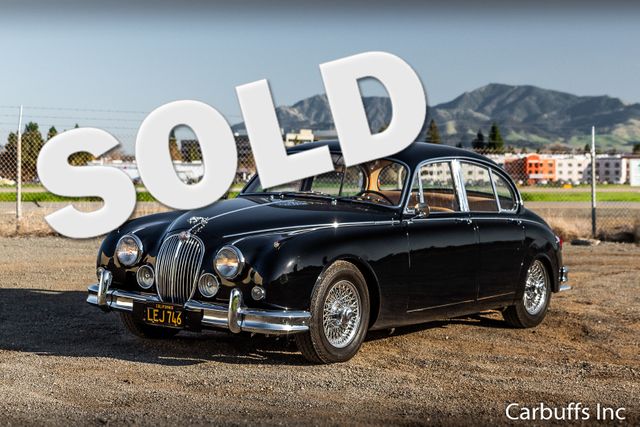 A unique opportunity to own a rare, early production 1960 Jaguar Mark II

If you are familiar with the Jaguar Mark II model, the details, materials, lines and craftsmanship is something to behold. Grace, pace and space were all correct terms in describing this vehicle.

At the time of its production, this was the fastest car on the market. If you are not familiar with these cars, they are great sedans, that are not too big or small and have beautiful lines and curves from all angles.

The current owner of this special Jag has had this car since March 2006.

The car has been driven regularly and shown at local shows. A very reliable and fun to drive car. When purchased the original mileage was about 37K and now is at 45+K.

The current owner came to find out by accident years later was that was a very special Mark II.

He was told by his mechanic that another Jaguar expert saw the car mentioned this. The owner set off on a research binge to understand what he was talking about.

His research found out that the car was indeed a very early model example with some rare factory features.

A Jaguar Heritage expert confirmed the car was #560 off the production of the 1960 Mark II’s being produced in November of 1959. A formal certificate comes with the car and confirms its current color pairing.

The car was originally shipped to Los Angeles CA. Receipts show the then current owner of the car had it restored in 1998, with a motor rebuild, interior and exterior redone. The car then came to the Danville, CA area where an elderly gentleman owned and cared for the car. When he passed his family decide to sell the car and is where the current owner took ownership. Since the car was so well taken care of all the rubber, chrome leather, etc, are in great to excellent condition.

The current owner has done regular maintenance and some of the work done in the past 12 years and most recently include:

Early rare features on the car include:

§  Front Fender Oil Bath Air cleaner system – An oil bath container sits in the left front fender well and passes cleaned air through a hose up through the fender into the engine bay. Early MK2’s had an oblong air filter in the engine bay. This car has both the oil bath and air filters as original.

§  Role Up antenna – an rare factory option, included in the car from the factory. A roll up crank under the dash controls raising and lowering the antenna.

§  Recessed Sun visors – early cars had sun visors that would sit in a recessed headliner, this car has that as well.

§  Original Tool Kit – Rare and hard to find unused and original tool kits this car has its.

As for other features that makes this car a nice collectors example:

§  Documentation of engine rebuild and restoration notes from 1998 restoration.

Condition is excellent all around, with several areas of checking on the paint. All chrome and rubber is in excellent condition as is the interior wood and leather.

The car fires up and can cruise at 70-80mph without an issue. No overheating. Power Steering and brakes all work very well.

Please call for viewing hours as not all consignment vehicles are on-site.