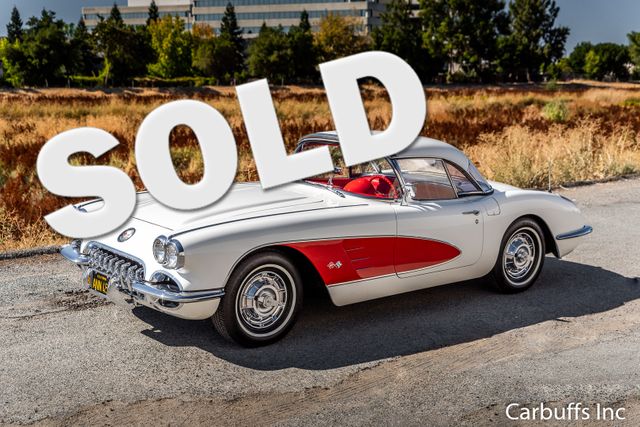 Current retired mechanic owner has had the car 42 years. Snowcrest white with a red cove and red vinyl interior. Originally had silver coves but when the car was repainted in 1978 the owner changed the cove color to red to match the interior. Lacquer paint still looks great after 41 years.

The car originally came with a 283 V8 and 3 speed manual. However, when the current owner purchased the car it had a non-original 283 in it. Since it was not original and he was looking to make the car a better driver he built a 350 engine and added a Muncie 4 speed transmission. He also added power steering which was not available in 1959.

Original dash pad and door panels. Has both tops. License plates are original black plates that were put on the car in 1963. Runs and drives excellent! Used as a parade car when the Happy Days cast had a celebrity softball game at Candlestick park in 1977.

Please call for viewing hours as not all consignment cars are on site.